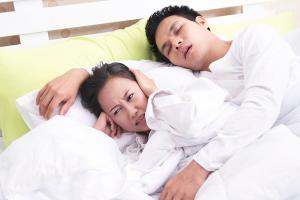 Snoring is a symptom . Obstructive sleep apnea (OSA) is the consequence disease of this symptom. Obstructive sleep apnoea is defined as the cessation of breath during sleep about 10 seconds.
The severity is often established using the apnoea/hypopnoea index (AHI), which is the number of apnoeas plus the number of hypopnoeas per hour of sleep. An AHI of less than 10 is not mostly to be associated with clinical problems. When there is a upper airway blockage within the nasal passage, the lungs work harder creating a more negative pressure to suck in air. This results greater negative pressure in hypopharyngeal upper airways(like soft palate) leading to collapse and obstruction.
Snoring and obstructive sleep apnoea (OSA) occur as a final result. OSA only happens during sleep, as it is a lack of muscle tone in the upper airway that causes the airway to collapse. During the day we have sufficient muscle tone to keep the airway open allowing for normal breathing.
Diagnosing Sleep Apnoea
-Endoscopik examination of the nasal cavity, nasopharynx, oropharynx(tonsil size, soft palate, uvula pillars) , larynx.
-Polysomnographic examination (monitoring the quality of sleep either at home or at the hospital) , sedation sleep endoscopy , some radiologic examinations, Body Mass Index, sleep latency test, Müller tests
The obstruction areas in the upper airways causing OSA
- Nasal area (septum deviation, inferior turbinate hypertrophy, polyps, adenoid)
- Thick, long soft uvula and soft palate , hyperplastic and obstructive tonsils, large tongue base
-Narrow retrophayngeal and laterophayngeal region
Treating Sleep Apnoea
-To lose weight
-CPAP (continuous positive air pressure) or BPAP (bilevel pressure, more in inhalation, less in exhalation)
-Mandibuler advancement by some mouth prothesis
-Nasal area is very important. Septoplasty(twisted septum) and turbinoplasty shoud be performed in case of any problem. Proper management of the obstruction in the nasal area solves %25 of the OSA problem. These operations on the nose should be done either at the same time with the ones in oropharynx or before.
-Tonsillectomy in case of obstructive large tonsils
-Implants on the palate
-Modified uvulopalatoplasty operations
-Uvular operations (uvulapalatal flap or minimial resection)
-Anterior palatoplasty (resection of a small area on the soft palate and creating tension by some sutures)
-Lateral pharyngoplasty
-Base of tongue reduction (Radiofrequency or conservative surgery)
-Mandibula lingual sliding techniques
The essential is to chose the right technique due to the individual's specific pathologies causing obstruction .
As a result snoring is not only an uncomfortable symptom, but also the first sign of an obstructive sleep apnoea which may be a real threat for general health in the future. It can and should be cured......